What’s up every­body. Welcome back for another year of classes and what­ev­er. This site will be pick­ing back up by exten­sion of me having to be on campus and, there­fore, me having to find good bath­rooms on campus. Since there’s going to be 40,000 more people at or around school than the last three months I figure some of y’alls will need to find suit­able restroom spots also! Espe­cially you fresh­men that will all be taking 12 million person lectures for terri­ble classes like CHEM 142 in terri­ble places like Kane Hall and eating in more terri­ble places like the HUB and study­ing in the terri­blest places like Odegaard at equally terri­ble hours of the day (or night). The point here is that there are a lot of terri­ble aspects to college (not just UW but pretty much all of them in gener­al) that you’re not going to be able to avoid in any sort of way, but you should opti­mize all the vari­ables you can control to make the rest of the terri­ble things a little bit less terri­ble. One of these impor­tant vari­ables, in my mind, is where you go to the bath­room. If you really need to know all the reasons why, read the intro post, but I think it’s pretty self-explanatory.

We’re kick­ing 2014 off with the recently rebuilt Ethnic Cultural Center. This is located kind of a ways away from the main portion of campus by all the south­ern dorms that have been going up the last year or two. All the construc­tion is pretty contem­po­rary and stuff. That new tech­nol­o­gy-sus­tain­abil­i­ty-ur­ban-liv­ing sort of feel to it that is pretty much every­where in Seat­tle now where they try to do unique cool designs but every­thing ends up look­ing more or less the same. But that’s another issue. Anyways it’s on the corner of Brook­lyn and 40th. 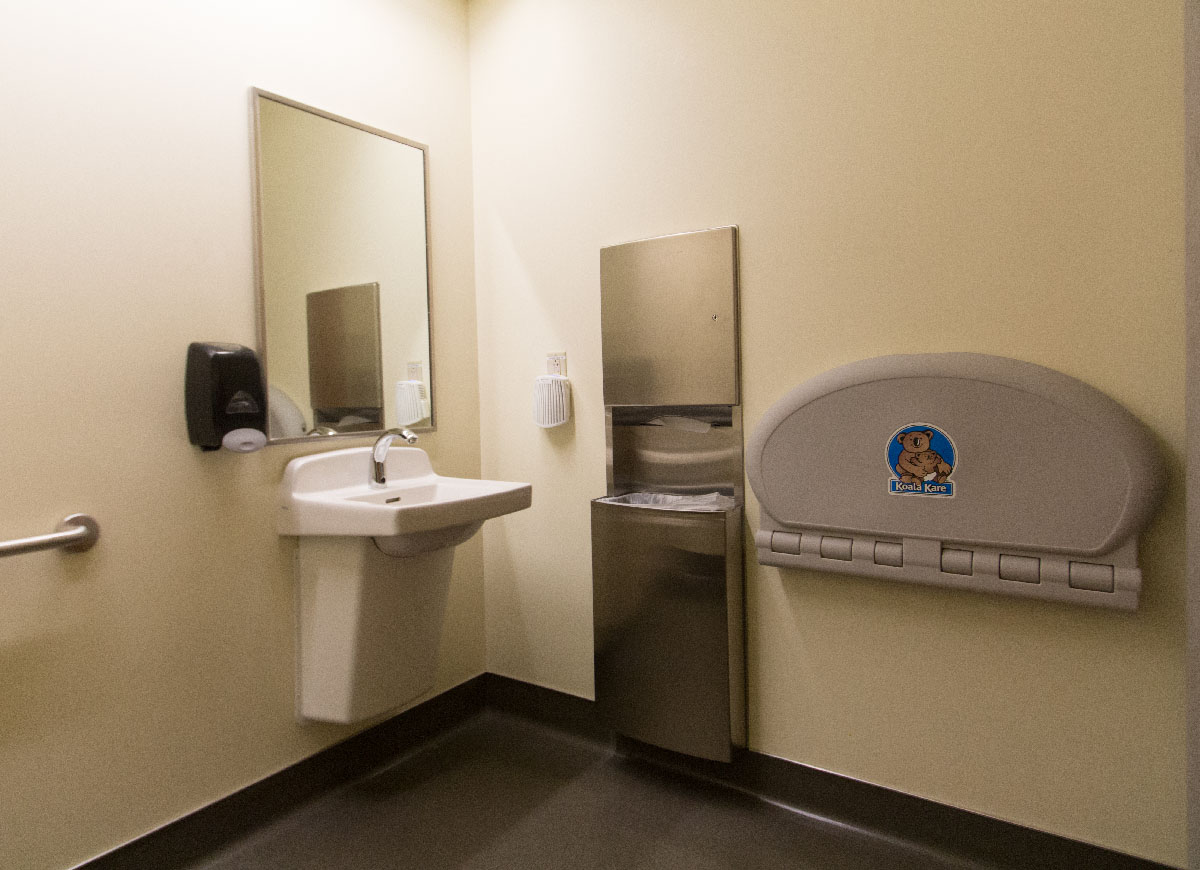 The inte­rior hasn’t really been broken in yet and every­thing’s still pretty sleek and shiny and not that dirty. I’m not really sure what all goes down at the Ethnic Cultural Center, aside from cele­brat­ing vari­ous cultures and ethnic­i­ties, but it’s I think that it’s less utilized than what they want it to be. Fortu­nate­ly, those types of build­ing attributes usually make for pretty good bath­room hunt­ing mate­ri­al. New, under­used build­ings trans­late to good bath­rooms. If this is an actual hunt, I would say an appro­pri­ate game compar­i­son would be a water buffalo or a sword­fish/­mar­lin. They’re the sword­fish of the bath­room game. 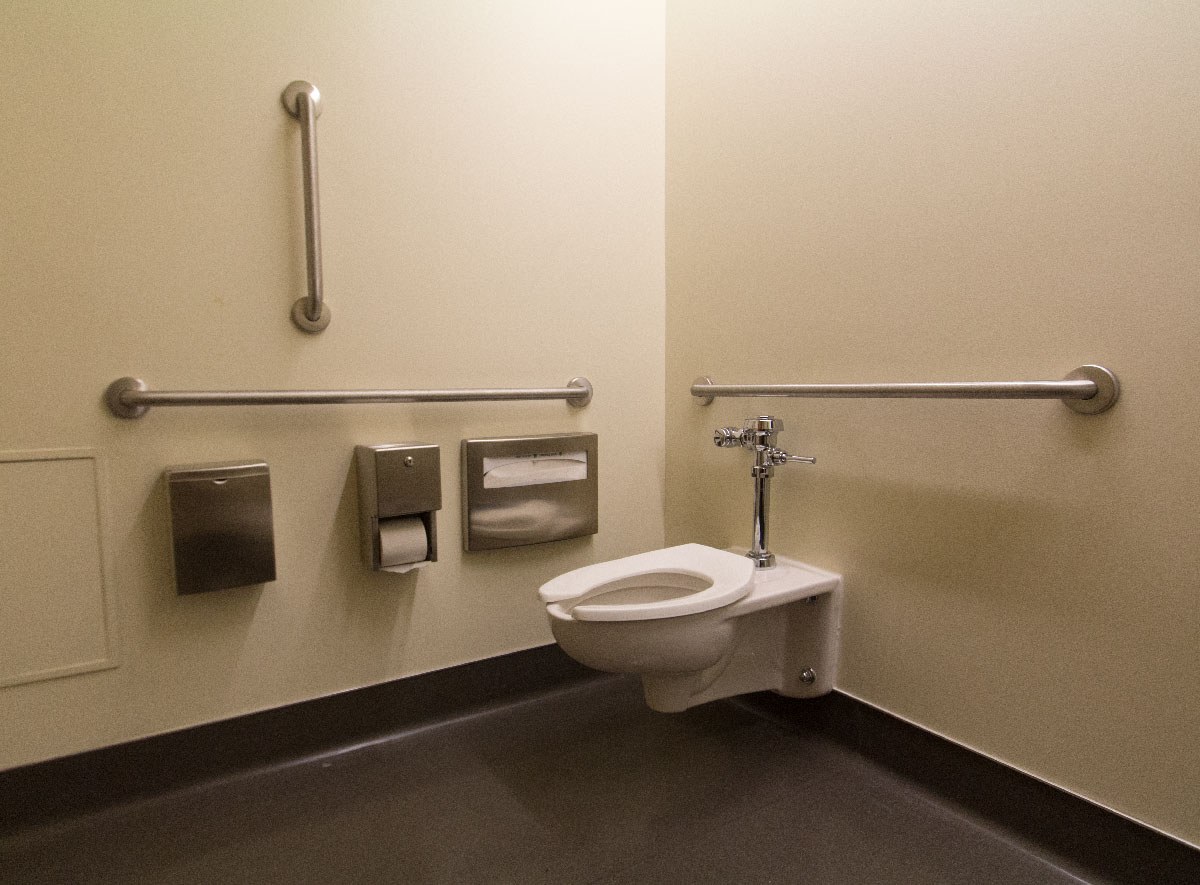 So these bath­rooms are pretty nice! The surfaces are clean and the toilets them­selves don’t have after-use residue around them and the toilet paper was in ample supply. As a bonus, they have the single person multi­-use bath­room that has one toilet and a lock­ing door right next to the gender-sep­a­rated ones. I used the multi­-use one first to take a big stinky dump and avoided much public scorn in the process. These are absolutely neces­sary if your diges­tive system is recov­er­ing from danger­ously high coffee and/or Memo’s consump­tion. There’s also a vend­ing machine for tampons that cost a quar­ter, for all the folks that have to expe­ri­ence menstrual cycles. Nice. 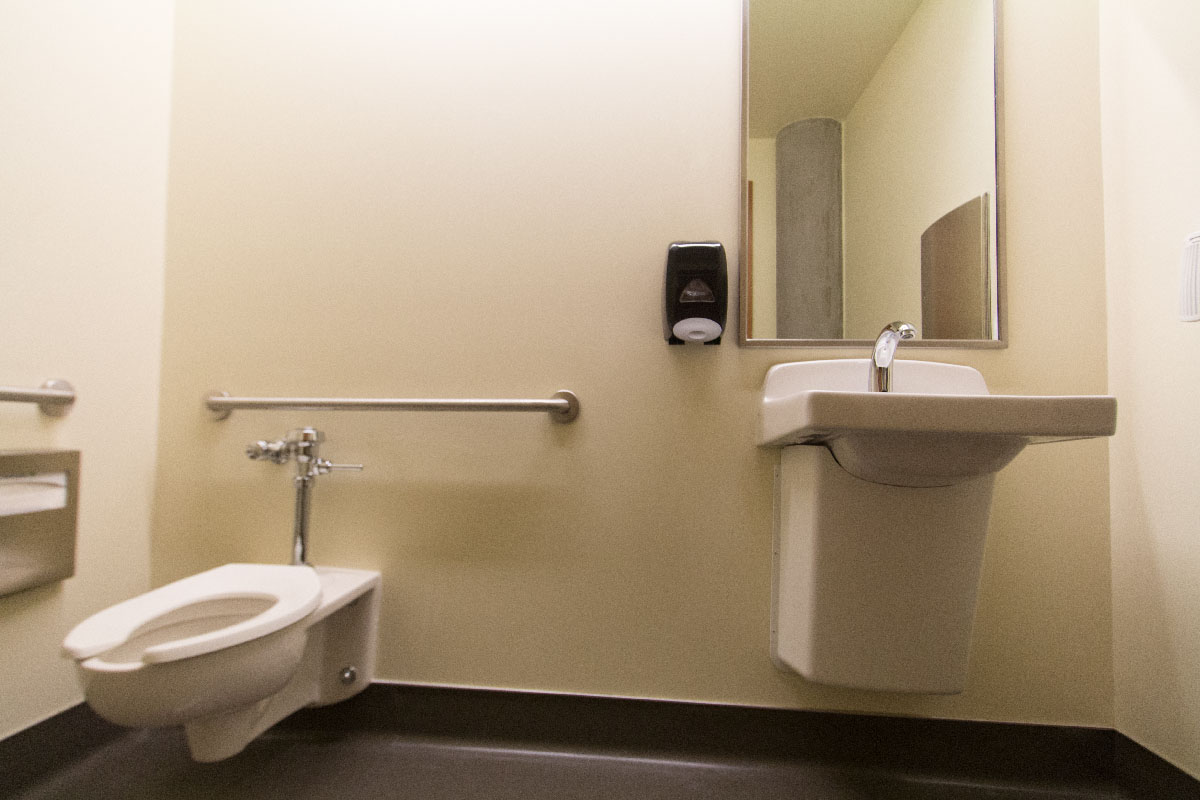 The men’s room is still clean and nice and every­thing, but there’s a couple issues. First, does­n’t the ECC host events and have a stage and every­thing? (At least the old one across the street did.) If that’s the case, why are there only two freak­ing urinals? And only one toilet stall? 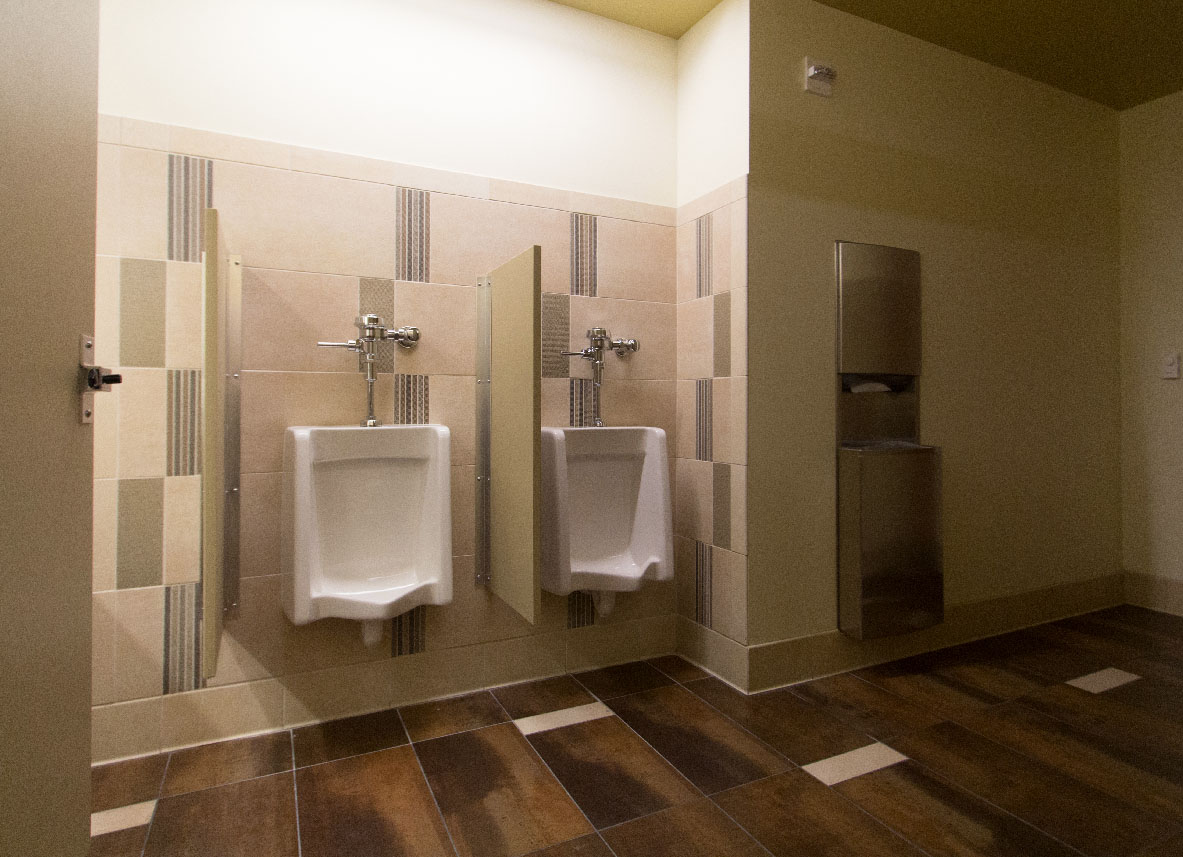 You can’t have more than four people in there at any given time, not that the bath­room itself is that small, but just because there aren’t enough recep­ta­cles to go around for much more people than that. There’s going to be a big, stupid line down the hall­way into the foyer thing and then you’re going to have to bump into people in the bath­room and it’s going to be awkward. Why could­n’t they have just avoided all this by putting in maybe two more urinals and maybe another stall? 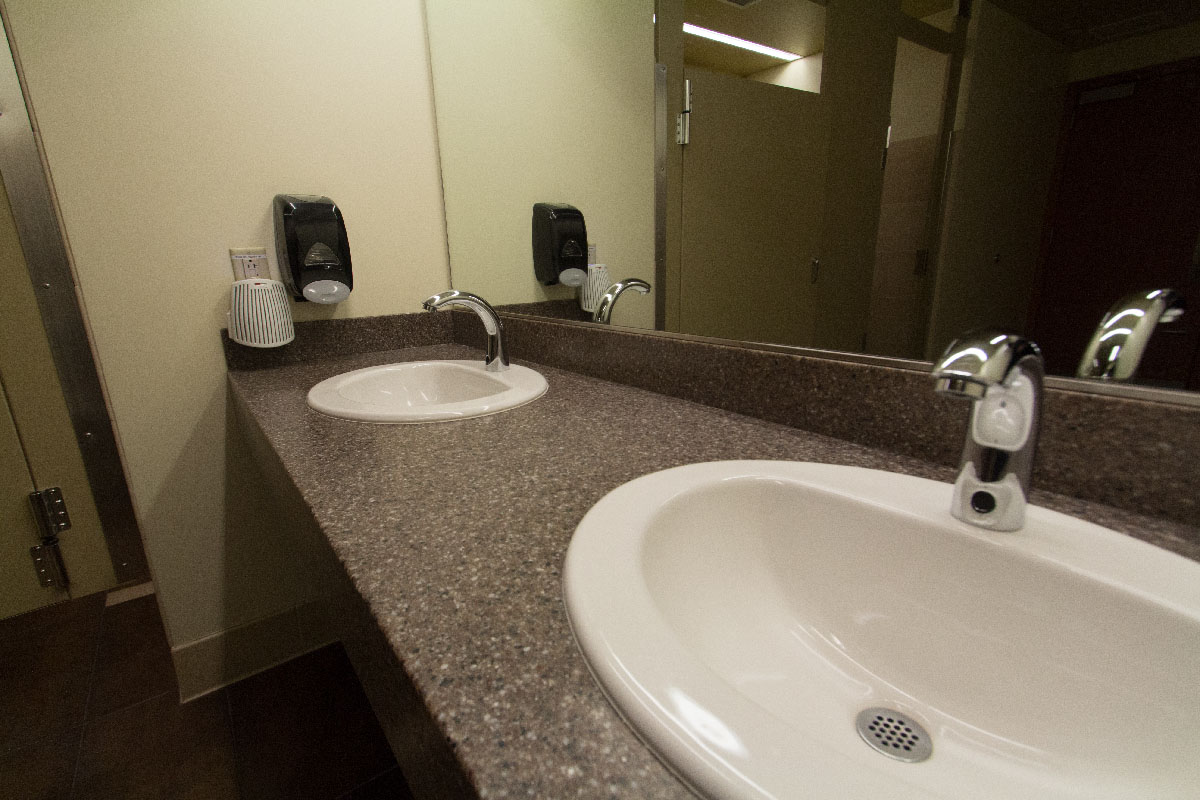 And what’s the deal with the soap dispensers? There’s two sinks in the sink area. The left one has a soap dispenser against the wall, but the right one does­n’t. So if you have the right sink and don’t want to look like a degen­er­ate that does­n’t wash his or her hands after you go to the bath­room, you have to fina­gle your way around the person on the left to reach the soap dispenser and drip water all over the floor, go back to the sink to rinse all the soap off, and then drip more water on the floor to reach for the paper towels. This process get compounded in tedious­ness when there’s an event going on and there’s a rush to use the bath­room. Not that drip­ping water is gross or anything, but having water all over the sink tops and the floor just isn’t that clean look­ing, you know? Paper towel dispensers might be another thing but at least put the soap dispensers in a place that’s conve­nient for more than 50% of the sink users. You don’t even need to double the amount of dispensers, just move it in between sinks and boom, problem solved.

So a couple quick changes to these bath­rooms and they’re all good. Does that mean you should­n’t use them? Hell no. If I was an under­class­man that had enough finan­cial assis­tance to be able to live in the South Campus dorms, I’s defi­nitely prefer to use the ECC bath­rooms over the prob­a­bly gross commu­nal ones you share with your weird, unsan­i­tary suit­e­m­ates. It’s pretty much on the way to where all your classes are going to be anyway. Other than that and actu­ally doing some­thing at there, its loca­tion is kind of a breaker for me getting a lot of use out of this spot.