UW Bath­rooms has begun to wake up from its winter dormant the last couple days. The reasons for a lack of main­te­nance has been due to class­work and other extracur­ric­u­lars taking (forc­ing?) prece­dence this winter quar­ter, making it hard for me to write about new bath­room joints I stum­ble upon. I’m really hoping to see an increase in reviews but seeing how school and life has treated me the last few fort­nights (Re: Febru­ary, seri­ous­ly, fuck that month) I’m not going to get too opti­mistic. One can hope. Take these reviews as they come. Maybe I’ll get some guest posts from time to time; people have submit­ted some to me but given my one-sided rela­tion­ship with email they go unno­ticed. You don’t have a choice when you get a smart­phone though. It’s no excuse now. The stakes have been raised.

Gould Hall is nice because it’s far enough off campus that nobody’s really going to go there just to hang out or play Star­craft on public comput­ers but it’s also close enough to other build­ings, primar­ily south campus dorms, that it’s not completely isolated either. So anyone that goes there is typi­cally asso­ci­ated with the college of archi­tec­ture in some way, shape or form. It is usually bustling with human beings contain­ing border­line toxic amounts of stress hormones and caffeine in their blood­stream because of the 12,000 project dead­lines they’re trying to meet simul­ta­ne­ously so it’s usually not a place to go talk to and meet strangers unless you’re meet­ing your project group members, where you will see groups of three or four of them beer-bong­ing coffee and seething at the same time because they’ve been in the studio for the past 16 hours and CS5 crashed on them for the third time. So need­less to say it’s a good place to work on home­work by your­self if you’re around that part of campus. I would recom­mend study­ing in the library on the third floor. It has a neat view of downtown/Capitol Hill.

The build­ing itself is a cross between a construc­tion site and an Embassy Suites. It’s got the atrium thing going on and the struc­tures are made of concrete with wood panel­ing/ac­cents. Another touch is the stair­case span­ning over the atri­um. It’s a really cool build­ing but plebes will complain about how it’s too far to walk to get to the next stair­case to get to the next floor. I person­ally don’t mind it because that feature deters such complain­ers from coming back, making traf­fic in Gould constant but pleasantly light.

Possi­bly because the design­ers knew it would be some­what of a pain to get to the floor above or below you, they accom­mo­dated each floor with a restroom. The catch is that they are put in oppo­site corners of each floor, and on top of that, there is no rela­tion between the corner that they are in and floor they are on. Depend­ing on the entrance you use, it’s going to be a coin-flip as to what bath­room you’re going to use if you’re in a hurry. For conve­nience purposes I sought refuge in the men’s room on the first floor, which is located by the pain-in-the-ass coffee bar that WARN­ING: ONLY TAKES CASH. 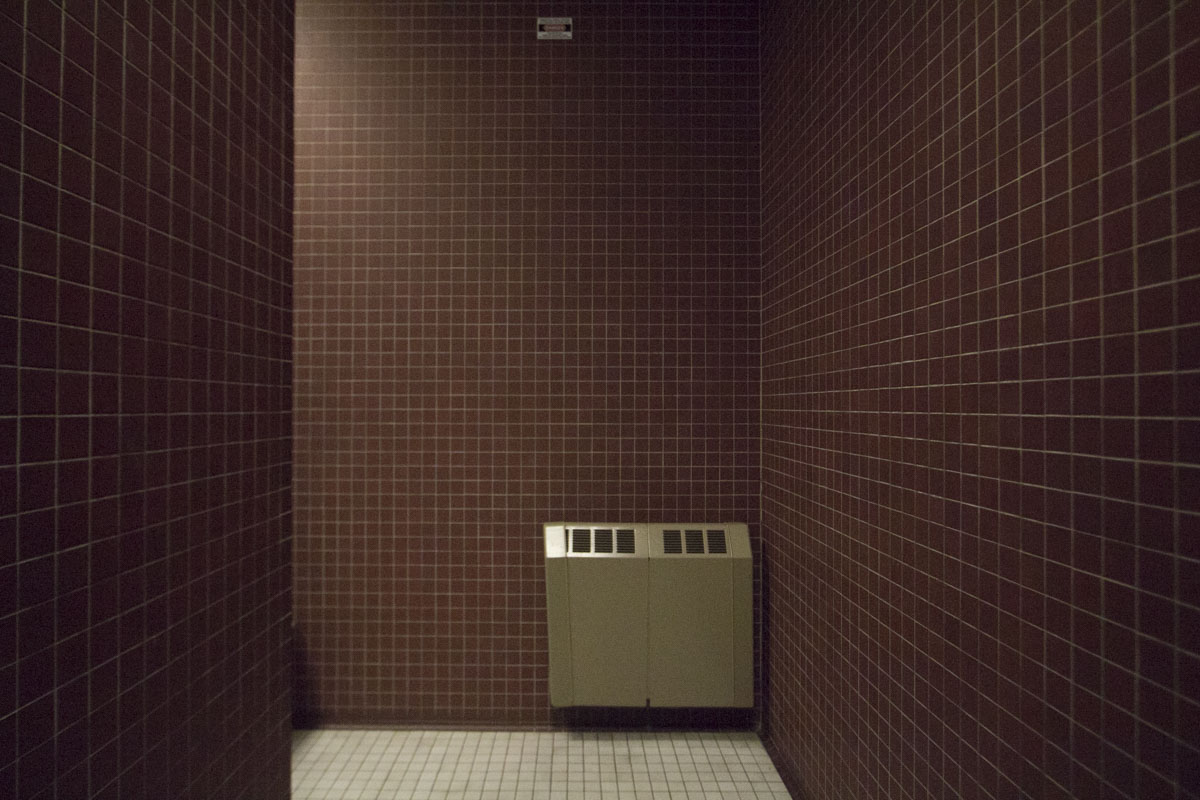 The entire bath­room is red, which reminded me of Carrie when I first walked in. I felt slightly uncom­fort­able know­ing that there was a possi­bil­ity that it might have been a women’s restroom at one point, due to perpet­u­ated and rein­forced gender stereo­types regard­ing color asso­ci­a­tions and inte­rior design tech­niques with gender type. 2 seconds into using this restroom and it’s not look­ing good. This bath­room’s got me feel­ing guilty about having to think that I assumed it was a women’s restroom. What a male chau­vin­ist pig I am. 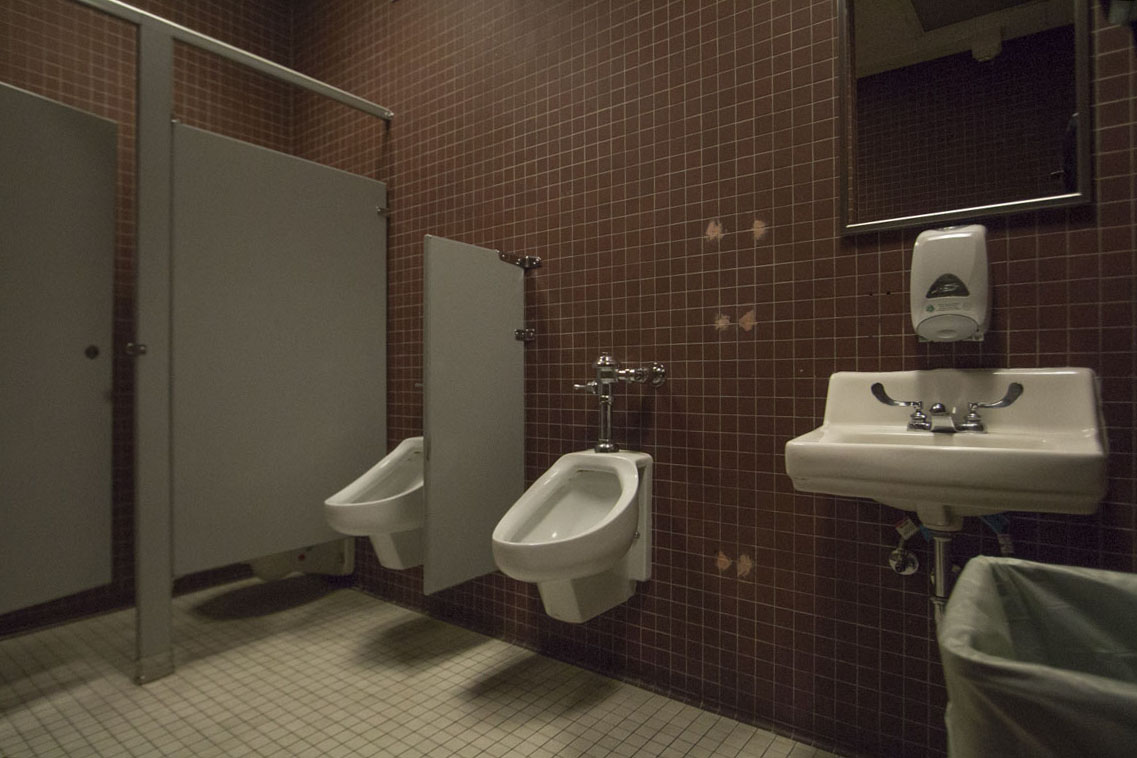 Things dras­ti­cally improved when i delved into the depths of the restroom. Gould M1, and as far as I know, all the men’s rooms in Gould, has a cool layout where the urinals and stalls are on oppo­site sides of a wall that look towards each other. A “hall­way” with sinks connects the two corri­dors. Urinals are on the right side of the wall and stalls are on the left. While the stalls are not entirely isolat­ed, it does reduce the amount of traf­fic that they are exposed to because they are kept away from the urinals, which means that all you private poop­ers poten­tially have a new quiet spot. The urinals are small and mini­mal­ist in design which are nice since I don’t like a big, impend­ing hunk of porce­lain to pee in. Urinat­ing is a deli­cate proce­dure for men. Urinal stalls are an added bonus. The sink area was pretty clean. Natural light supple­mented the airi­ness of the ambiance which made wash­ing my hands a pleas­antly relax­ing expe­ri­ence. By the way, if you don’t wash your hands after you pee, you’re gross as hell. Marie Curie, Louis Pasteur and Florence Nightin­gale all turn in their graves when some igno­rant simple­ton does­n’t wash their nasty ass hands after they touch their geni­tals and clean their buttholes.

While first impres­sions of the bath­room left me daunt­ing, the layout that encour­aged privacy left me feel­ing posi­tive about the expe­ri­ence. Gould may not be a place that you normally head to but you will have ample safe havens to go pee.