Apolo­gies for a lack of any reviews last week. I acci­den­tally forgot to drink any liquids for the last 8 days so I never peed, there­fore making bath­room review­ing next to impos­si­ble. To make up for a lack of reviews, I will be review­ing a bath­room on campus as well as the ones in the house I live in. This is not just to appease you, read­er, but came up as a neces­sity due to the amount of people that we have had over at our last two parties that pee, poop, pass out, puke or procre­ate (the 5 primary P’s of bath­room use) in our bath­rooms. This is to let you party animals know where to do each of the P’s.

To start things off, though, I revis­ited Kane Hall (not by choice, I have class there 4 times a week) and took the eleva­tor down to the base­ment. You can take the stairs too, but they are only acces­si­ble from the outside on the east (quad-side) of the build­ing, which you can get to from the inside from a door that lets you out right next to the stairs. Walk/el­e­vate down and the bath­room is by the corner of the long hall­way you’re in. There are signs, don’t worry. 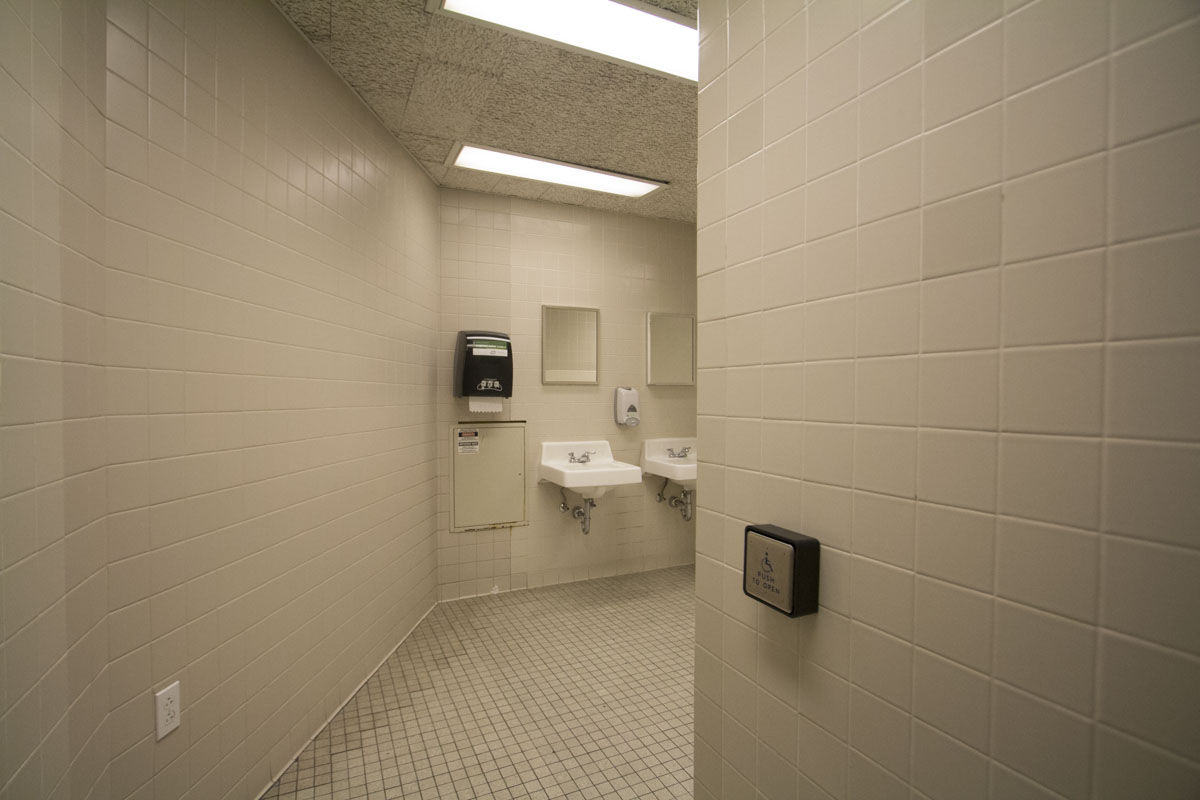 The bath­room has a lot of differ­ent rooms to it. Apt metaphors for this would be the plot of Enter the Dragon and the album Enter the Wu-Tang (36 Cham­ber­s). First there’s the entry­way. Noth­ing going on here. Hit a right and you get to the indi­vid­ual stalls. There were about five of them, and only one of them was used. I only peed in these guys because I initially could­n’t find the urinals. I found those later but not after discov­er­ing some­thing quite disturbing first… 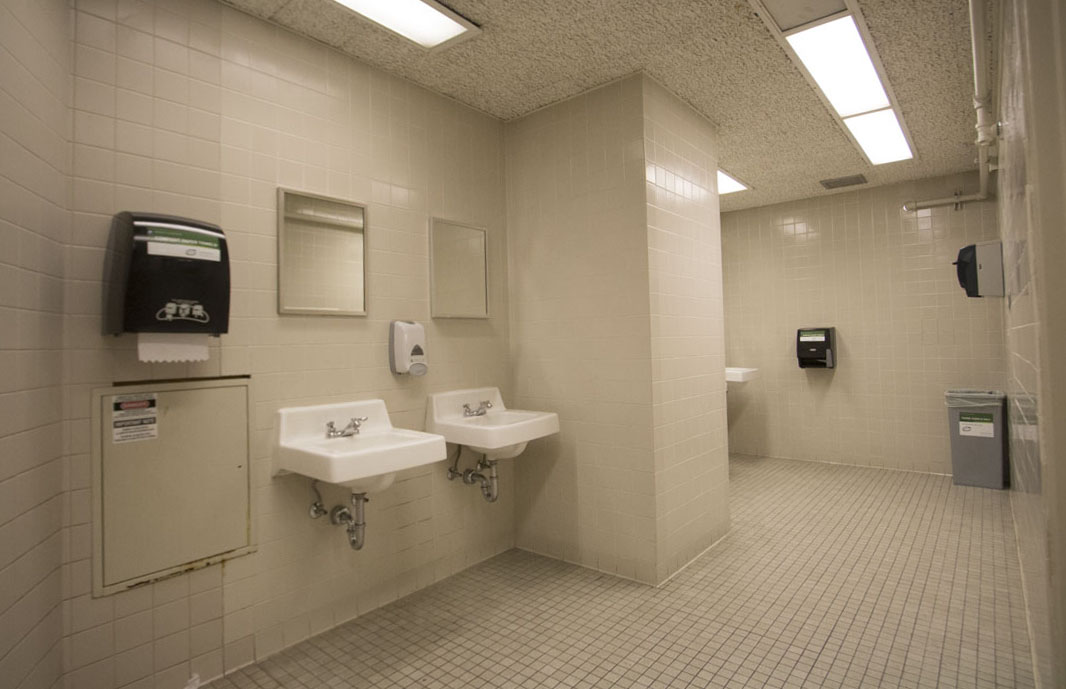 There’s fuck­ing asbestos in here. Asbestos as in the shit that gives people fuck­ing lung cancer. In Kane Hall. There’s signs indi­cat­ing that the bath­room is filled with this shit. Why would I want to know that I’m getting my alve­o­lus sacs clogged with some bull­shit inde­struc­tible fibers (spelled fibres if you are English)? Why would you want to make people consciously aware that they’re being exposed to some­thing that’s been BANNED from construc­tion? They might as well have painted the ceil­ings with lead­-based paint. UW fucked up big time. 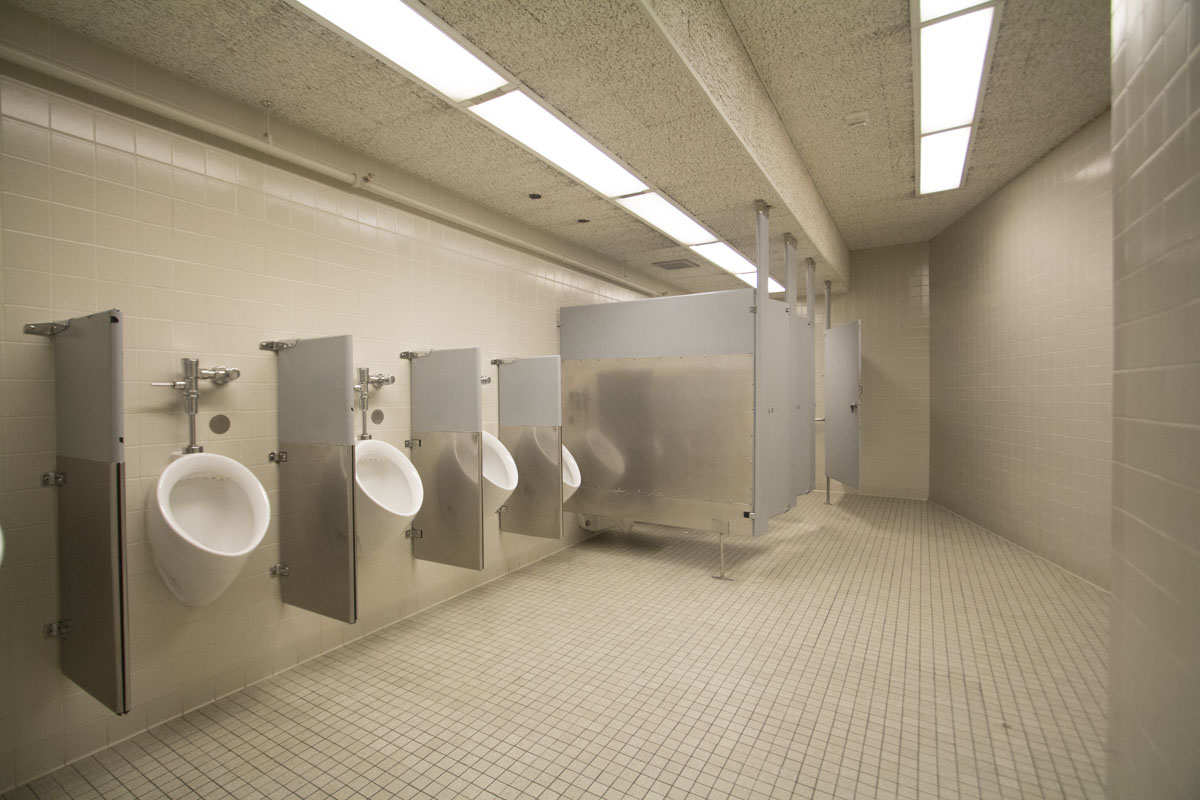 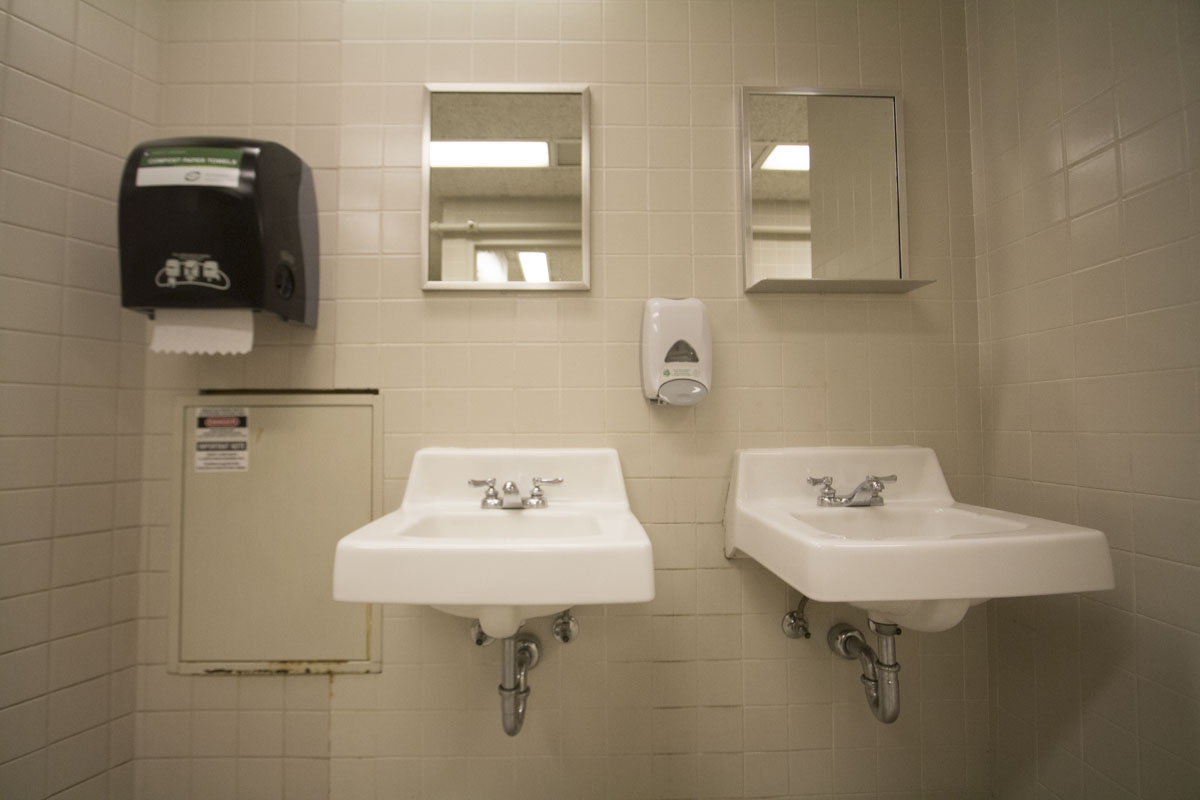 Once I got over the deeply trou­bling real­ity that I was exposed to some freak­ing asbestos for Chris­sakes, I stum­bled upon the urinals as I tried to locate the sinks, both of which are adja­cent to one anoth­er. I took a peek to see what was up in the urinal cham­ber and saw only more signs warn­ing me of asbestos. I washed my hands and headed out shortly thereafter.

A couple things to take away from here. The first and most notice­able being that there weren’t a lot of users. One guy poop­ing and one guy using the urinal was the extent of my human contact, not to mention that this was imme­di­ately after a pass­ing period too. The bath­room is pretty clean and well-l­it. This is a friendly envi­ron­ment over­all (if you manage to ignore the asbestos warn­ings). The config­u­ra­tion takes some getting used to, and you might die of lung cancer if you stay in here for prolonged peri­ods of time, but this is the much better of the two Kane bath­rooms due to it being way less shitty than the upstairs one in liter­ally every aspect. Minus the asbestos part. That’s the one thing the 2nd floor Kane bath­room has going for it.

Part II of the review brings us off campus to my triplex that I share with twelve other people (tech­ni­cally it’s fifteen if you include the base­ment plex but I don’t inter­act with the people that live down there, let alone use their bath­room­s). The break­down of the upper plexes is the ground floor, contain­ing three toilets and two show­ers and sinks, the first floor, which has one toilet and two show­ers and sinks, and the top floor, which is a sepa­rate lease from the middle two floors and also has one of each amenity.

We’ll work our way down from the top in a party-go­er’s perspec­tive. The top floor belongs to three guys that pregame up on their floor before head­ing down. Often­times people will linger upstairs to get away from the main party on the ground floor or hook up in one of their bedrooms but are encour­aged to remain down­stairs. Their bath­room is pretty gross but you don’t really have a choice. During pregame hours those unfor­tu­nate to break the seal will pee upstairs. That remains its primary func­tion until around 12:30 when people that are on the verge of alco­hol poison­ing (fre­quent­ly, but not limited to, a cross coun­try fresh­man) some­how find their way upstairs and barf almost all of their stom­ach fluids into the toilet. Most people that barf up here are friends of the upstairs folks so they don’t mind as much. I’m fairly certain that a rando (which we happen get a lot of at our parties and it’s really fuck­ing annoy­ing) hasn’t barfed up there before though. Hook­ing up has never happened in the top floor bath­room and most likely never will. Also, an alter­na­tive to peeing in the top floor bath­room is peeing off the balcony into our asshole neighbors’ yard.

Moving down a floor you get to the main lease. On this partic­u­lar floor we have two show­ers and the one toilet that are the preferred locale for throw­ing up as well as forni­cat­ing, although they are not entirely mutu­ally inclu­sive of one anoth­er. Some weird shit goes on in these bath­rooms and they smell fuck­ing awful after 2 am. People also like to use the floor space in this bath­room to pass out for the night. I encoun­tered one such person after one of our parties we had during fall quar­ter. It was 6:30 am and I had to pee really bad, so I went to go pee when I see this dude sprawled out on our bath­room floor. Still being drunk, I ratio­nal­ized that I did not want to take this stranger up, so I peed in the sink. I am not ashamed of perform­ing such a deed. I reit­er­ate, weird shit goes on upstairs. Avoid it at all possi­ble unless you’re absolutely hammered or blacked out.

The down­stairs bath­rooms are the in-house recom­men­da­tion to perform one or more of the 5 PP’s at any given party we host. For reals, it makes all the resi­dents’ lives so much easier if you just stayed down here. There’s three toilets to choose from, although one is broken but the door is marked with a sign as to not confuse any of the liter­ate house guests. That leaves the agora­pho­bi­a-in­duc­ing water closet adja­cent to the sink and the slightly bigger one behind it. Seri­ous­ly, please just use those two bath­rooms. If you really have to pee, just pee in the show­er. Hook up in the out of order one. I don’t know who poops at a house party but if you need to do that or throw up use one of those two toilets. There is moti­va­tion not to pass out down­stairs, though, because if you do you’ll prob­a­bly get trampled.

Well, there you go. I knocked out two birds with one blog post today. I don’t think we’ll be throw­ing a party any time soon but now there’s no excuse to not know proper bath­room etiquette at my house. Also, use the down­stairs Kane bath­room if you absolutely need to go after what­ever lecture you have there.